About Mar Toma and Father Stan 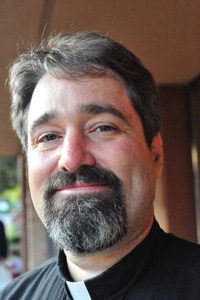 Mar Toma is Aramaic for "St. Thomas." The eastern Christians in India are often called St. Thomas Christians because he personally founded their church along with Saints Peter and Thaddeus. We go forward with our Holy Chocolate in the same tradition of the Eastern-Syrian merchant-missionaries that packed up their goods and scrolls and walked the Silk Road to care for the needy, set up schools, and share the Good News of The Gospel. The Mar Toma Enterprise is a means to support our ministry and charitable activities, and to provide opportunities for those in need.

Bishop Stan is in the Apostolic Church of St Thomas, formerly called the Church of The East in America - an Eastern Syrian Orthodox Church. His Church is involved in education, world peace, evangelism, and caring for the souls of people in need wherever we find them. Before his ordination, he was a Quality Assurance Engineer.

Bsp Stan loves God. He also loves chocolate. He combined his two great passions, and Holy Chocolate is the result.
Holy Chocolate supports Father Stan and his ministry. He receives no money from his church. "I have faith in God, and that's all you really need in life. If you are willing then God is able. And many miracles have happened to facilitate our company's growth."

The Creation of Holy Chocolate

One frosty night I thought to make my usual hot chocolate from scratch, using natural ingredients: milk, cocoa powder and so on. While scalding the milk, it boiled and bubbled all over the stove and burned to the bottom of my sauce pan. After I cleaned up all the chocolate and scrubbed out the pan, I made some instant hot chocolate from one of the big name companies. It was so terrible and salty, I poured it out and went to brush my teeth.

Most instant hot chocolates have artificial creamers and ingredients, added salt, and so much sugar you can feel your fillings sizzle while you drink it, but what they lack is a strong chocolate and real taste. Usually this dilution is thought to be a trade-off for the convenience of an instant drink.

I like my chocolate pretty strong, and I always have even since I was a kid. So I made Holy Chocolate to suit my own tastes. That means you will get a sophisticated and strong chocolate with a single packet of mix.
My father was a well known scientist and his father was an inventor. I grew up in California's Mojave desert in a town filled with brilliant scientific minds. The inventive part of my soul became fascinated with how I could make an instant mix that would taste as if it were chef-prepared but without the fuss. So I developed Holy Chocolate step by step over 5 years.

While pastoring I served the chocolate to my very small congregation one day after the Sunday service. Everyone really loved it. Later that week a few ladies came by for "counseling." But they didn't want any counseling, they just wanted some more chocolate!
Finally, there was an economic downturn and some people lost their jobs and were moving away from our tiny congregation. Searching for answers to face the challenge, a lady proclaimed, "Sell the chocolate!" And, in 2004, that was how it all began.